Whether you live in Las Vegas or visiting this city has a lot of diverse fun things to do! Las Vegas is the entertainment capital of the world, with gaming the lead attraction its only part of what you can enjoy while playing in Las Vegas. Here is the top things to do while in Las Vegas.

Mount Charleston is 11,916 feet, 8th largest mountain in Nevada, and is 35 miles NW of Las Vegas. It is a local hot spot year around or a great place to explore for visitors. Mount Charlestons offers a great relief in the summer time with temperatures 15 to 20 degrees cooler then the Las Vegas valley. There is plenty of hiking trails, skiing and sledding in the winter months, 200 camping sites, and 150 picnic areas even some with RV access.

Red Rock Canyon National Park is located a few miles west of Las Vegas. It is located within the Mojave Desert with 195,819 acres of pure natural beauty. Red Rock Canyon is know world wide for its amazing rock formations, natural beauty, vivid colors of the rocks, which have been formed from the forces of nature over millions of years. You can view the area through the 13 mile Scenic Loop or through the trails and hiking with over 30 trails to explore. Some of the geology highlights include Aztec Sandstone, the great sandstone cliffs at Red Rock, thousands of feet high, are made up of the Aztec Sandstone.  This formation, about 180 – 190 million years old, is comprised of lithified sand dunes that formed in a vast desert that covered a large part of the southwestern United States during the Jurassic time.  The Red Color  of some of the outcrops of the Aztec Sandstone is due to presence of iron oxide or hematite. Exposure to the elements caused iron minerals to oxidize or “rust,” resulting in red, orange, and brown-colored rocks. Iron Concretions or red spots in the Aztec Sandstone are iron concretions, where subsurface water has precipitated iron oxide around a nucleus in the sandstone. Dinosaurs tracks of small bipedal (two-footed) therapod (meat-eating) dinosaurs have been found in the Aztec Sandstone at Red Rock Canyon in three different places. The small animal tracks made by proto-mammals, early mammals, and arachnids (spiders and scorpions) were also found.

Lake Mead is the first and largest national recreation area that spreads over 1.5 million acres of mountains, canyons, valleys, and two vast lakes. Lake Mead has 290 miles of water making it ideal for boating, jet skiing, swimming, fishing, camping, and hiking. If you don`t want to camp their is lodging available at the Temple Bar Marina Resort which does offer dining.

Built during the Depression; thousands of men and their families came to Black Canyon to tame the Colorado River. It took less than five years, in a harsh and barren land, to build the largest dam of its time. Now, years later, Hoover Dam still stands as a world-renowned structure. The Dam is a National Historic Landmark and has been rated by the American Society of Civil Engineers as one of America’s Seven Modern Civil Engineering Wonders. The Hoover Dam does offer daily tours and you do actually get to go into the dam.

The strip offers the most energy and excitement then any other place in the world! The Strip divides the city from east and west, its right in the center of town making it as a resident one incredible place to live. The Las Vegas Strip is 4.2 miles of lights, glamour, energy, fun, and it never stops! The strip and town is open 24 hours a day, it is a city that never sleeps. You can walk down the strip and enter any casino and find the best dining, buffets, restaurants, concerts, shows, thrill rides, night clubs, bars, gambling, shops, and so much more. The strip has top bands like Aerosmith, Doobie Brothers, 311 and legends like Cher, Billy Idol, or Barry Manilow doing extended residency concerts nightly. Also some of the top chefs in the world have with some of the finest restaurants like Wolf Gang Puck, Chef Gordon Ramsey, Bobby Flay, Pierre Gagnaire and many more. The Las Vegas Shows are one of a kind including Absinthe, “O”, Mystere, Cirque Du Soleil, Carrot Top, Blue Man Group just to name a few. Or party all night at the best night clubs with world-renowned DJ`S. The strip is truly a one of a kind place for endless fun.

If you are feeling adventures and want to view the city from a whole different perspective or would like to view a natural beauty like the Grand Canyon then there is nothing like a helicopter ride. There are plenty of great helicopter tour companies like Maverick or Sundance Helicopter that offer tours to the Grand Canyon, Hoover Dam, Red Rock, or fly down the Las Vegas Strip. Some of the helicopter companies offer package of rafting, weddings, proposals, or group events. Anyway you tour the city from a sky view it will definitely create some of your most memorable views.

Hi, I'm Jim Wicklund. I work with homebuyers, sellers, & investors in the Las Vegas & Henderson area who need help getting their house ready to sell or help homebuyers find their perfect home while navigating through the homebuying process.
I have been a Realtor since 2013, & I have served over 300 families.
The best praise I've ever received from a client was "Jim is not only personable but very patient, dedicated and determined to make his clients more than satisfied." Helping people to sell their house at top market value and find them their dream home makes me so proud and drives everything I do!
If you're looking for a Realtor who does what he says, has the highest level of service, then any other Realtor works very hard to achieve every goal with selling or buying a house. I'd love to work with you. Too!
I've helped hundreds of home sellers with my Client Concierge Service preparing their house to sell with my team; a service I pay for. I have also created incredible systems to help homebuyer clients ensure we will find their perfect home. And most important, we are here to serve our clients with their wishes, not ours!
When I am not helping people achieve their real estate goals, I can be found at the race track racing my motorcycle, playing my drums, spending time with my wife and dogs, or engulfing myself in personal development books; I love growing personally and professionally!
Experience
I am an active member of the Las Vegas Realtors Association, GLVAR-MLS, completed Short Sale Boot Camp, and I am experienced with investor-owning commercial & residential property. Much of my real estate experiences have come from a solid business background, a service-oriented mindset, and a strong work ethic which started with my first paper route at eight years old.
I started Premiere Home Entertainment with my wife in 1998, and we expanded our business in 2001 to service both residential and commercial work. Together, we built the store into a custom audio/video design and installation solution. I served as Vice President for 15 years, creating multi-million dollars in company sales every year.

Education
I have been a local Las Vegas business owner for over 20 years. In that time, I’ve earned an Associate’s degree and Ninja Selling certification, coached by Tony Robbins, dedicated thousands of hours to personal and professional development, and 35 years of sales, service, and business. 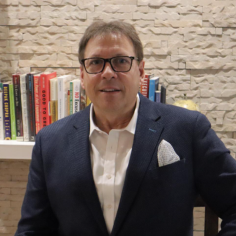